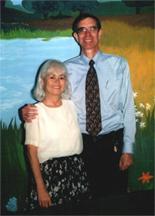 David Trexler, himself Deaf, attended Gallaudet University and received his B.A. (1982) and M.S. (1985) degrees at Western Oregon University. He also received a B.A. (1988) in religion at Union College. He was a teacher at North Dakota School for the Deaf from 1989 to 1991. In 1991 he received a call to work as associate director/editor of Deaf Ministries at Christian Record Services in Lincoln, Nebraska. He served in that capacity until 1997 when Christian Record Services closed Deaf Ministry. From 1998 to 2000 he worked as associate director/evangelist at the newly created organization for the deaf, Adventist Deaf Ministries. In September 2000 David became a pastor for the deaf in the D.C. area and a chaplain at Gallaudet University. In 2007 David accepted the call to work for Three Angels Deaf Ministries as Speaker/Director.

David is married to Francisca who is Deaf. Francisca has a Masters in Family and Marriage Therapy from the University of Nebraska. In North Dakota Francisca worked at North Dakota School for the Deaf as substitute teacher and dormitory counselor. Before that she has been a homemaker and home school teacher. David and Francisca has two grown up hearing sons, Alfred and Arthur.

David and Francisca have worked with the deaf since 1980 in many capacities. David has been lay pastor for the deaf, camp meeting speaker for the deaf, evangelist in Bermuda, Barbados, Toronto, Canada, India, Japan, Mexico and Gallaudet University, and revival speaker in several states. Francisca has been the children and youth director at camp meeting for the deaf, the cooking class instructor, the Sabbath school teacher, and has counseled many deaf people. She has given Family Enrichment Seminar in the United States, Canada, and Mexico. Currently, Francisca is Assistant Director for Three Angels Deaf Ministries.